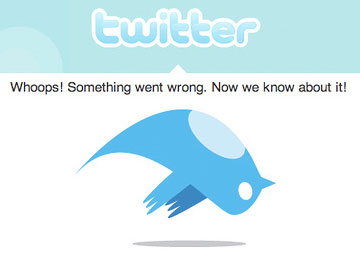 Read a bit of Andrew Keen at lunchtime. I do feel like I ought to. I like heretics. Still, it’s a pretty miserable read. Immediately cheered up when I got back to my desk, though, by a tweet from my 9 year-old boy’s class saying: “We have just compared two story openings. We have focused on the characters and settings.” His class and the other year 5 class at his school are using Twitter to update the world on what they’re up to.

A couple of kids in each class act as ‘Twitter monitors’. They send a couple of updates per day, that’s all, but it’s a really heart-warming thing: I’m getting a stream of tiny snap-shots from the chalkface. I feel closer to my Son and to what he’s learning (and it’s an improvement on the “er… I forgot” that I get if I ask him what he did at school today).

The idea is to give outsiders (principally parents) an insight into classroom activities and, ultimately, to connect classes together. A class here in the UK could follow one in India, for instance, and vice versa. I’m pretty sure Mr Keen would hate this, of course. But am I bothered?

Twitter is a simple application with one real function: notification. Twitter posts are called ‘updates’ (or sometimes ‘tweets’). People use Twitter to tell the world practically anything but usually what they’re up to right now.

Twitter is clever because it’s a platform. Dozens of applications already use it as a service. Businesses and individuals are using it to distribute notifications, links, reminders, press releases, even new content – stuff created specially for distribution via twitter (which is going to be very interesting). People are going to build businesses on top of it, just as they’re doing now on top of Google and other web 2.0 businesses.

Strictly, in fact, Twitter is clever because it’s a metaplatform, since it sits on top of a bunch of other platforms: networks, operating systems, applications. It’s all about the evolution of the ‘stack’: services like Twitter are slotted into the hierarchy of communications services above and below existing ones – between the bare wires at the bottom and the highly organised content and ideas at the top – making the whole thing richer and more useful.

Twitter is clever because it works on mobile, web and IM (And some other places too). Being at home in several different environments is quite a trick. Really, the only way to achieve this is to be very simple. Twitter is very simple: 140 characters of text. No pictures, no rich media, no metadata, no nothing. It’s lowest common denominator media (in a good way). Twitter’s richness is all in the contributions of its users

Twitter is clever because it’s social – participation involves building a network. Being successful on Twitter will require you to be popular or at least interesting.

Twitter is clever because it’s human. ‘Following’ someone who’s got something interesting or clever or useful or beautiful to say feels like a real privilege. As a follower you’re permitted access to something intimate and personal – you’re an insider. Getting a Twitter update from someone interesting is a real treat. Coming back to your mobile after a meeting to find a dozen is even better.

Twitter is clever because it’s made by its users. It’s a 100% user-generated form. Twitter is an unobtrusive (‘dumb’) carrier for the words of its users. Twitter – at least for the time being – promises no rich media additions, no video, no chat and no music. Twitter hackers, though, will probably provide all of the above.

Twitter is clever because it’s up-to-date. Attention spans are collapsing, content is distributed in ever smaller chunks, immediacy is a critical value for dozens of products. Twitter’s got the lot.

I’ve been twittering for a couple of months now. I’m not actually addicted (I could give it up any time) but I’m up to a couple of hundred updates and I’ve got two separate accounts going. I suppose you’ve been reading about it all over the place so I’ll stick to what I’ve learnt:

It’s a micropublishing platform. My own mini twitter venture, Listen With Bowbrick, teaches me it’s a great way to describe/curate/link to media resources and that these resources ought to be ‘in-line’. I mean reviewing theatre performances or restaurants might work but really you want to be quickly describing and linking to stuff your followers can view or listen to or interact with right now. Listen With Bowbrick points at Real streams of radio shows, for instance.

It’s a universal command line. It’s early days but we’re already seeing people hooking up twitter IDs to web services of various kinds. A news or weather service can just passively message followers or, more interesting, followers could ‘direct message’ a twitter ID to trigger a personalised response. I don’t see any difficulty at all in grafting an economic model onto this kind of service either, especially since mobile operators are already making money from twitter via txt revenues. In fact, I wonder if twitter is the kind of service that has such universal, cross-network appeal that it might start to bust up the operators’ partial monopolies.

It’s hyper-constrained: 140 characters (the 160 characters of a txt message minus 20 for your twitter ID) and that’s it. No pictures, no sound, even URLs are difficult (hence the heavy reliance on tinyurl.com). This turns out to be a good thing: simplicity drives ubiquity, limitations promote creativity. There will be pressure to add stuff – imagine a shozu/twitter mashup or a twitter/flickr hybrid, or playlist distribution for music retailers, or a some kind of twitter plugin for MySpace. Blah blah blah. but I’m pretty sure this kind of pressure will be resisted for the time being and that new functionality will be confined to the ‘lingo’ (twitter’s command set) and to exposing more of the application via the API – that’s how you get a big network going.

It’s socially fascinating. I think the statistical social anthropologists will have a field day here: a sort of automated version of sitting watching twittervision. Parsing twitter updates should expose underlying patterns and trends (at least for participating communities) on a more-or-less real-time basis. Instant archaeology. I hope somebody’s keeping all this stuff. Mining twitter data will be a big area for grad school archaeologists in the 22nd Century.

Incidentally, it’s a pretty good place to do an informal survey or a poll (a twurvey or a twoll). I did one yesterday – five questions to Listen With Bowbrick followers that produced dozens of useful responses in ten minutes. Remarkable.