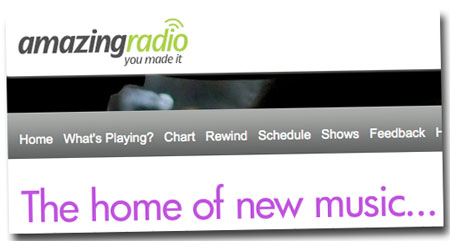 You might want to know: I work at BBC Radio but these are the opinions of a civilian radio nut and not those of the BBC.

I’ve developed a bit of a radio crush on a new station called Amazing Radio. Amazing‘s a national digital station mounting a head-on challenge to the music radio status quo. Unless you’re a radiohead like me you’ve probably never heard of it, though. And it’s worth a listen because it’s very different. For a start, there are no stars, no record labels and no ads. The station plays only music by unsigned artists, uploaded by those artists to the amazingtunes web site where it’s sold for 79p per track. The station even carries an ‘ethical’ label, presumably because artists keep 70% of online sales.

Listening is a fascinating, slightly disorienting experience. What you hear sounds like a conventional music station – music grouped into recognisable genres and linked in the usual, slick way by DJs (apart from the off-peak hours when the robots are in charge). The music goes out in familiar slots – there’s a breakfast show, a rock show and a chart show… But listen for twenty minutes and it’ll dawn on you that there’s something odd here: you haven’t heard any of this stuff before. It’s all new.

And listening to a radio station without the elemental familiarity of even the most ‘challenging’ conventional stations is a bracing experience. Tracks flow by without the contextual cues you’re used to: no history, no celebrity, no personal memories. And none of the credibility that comes with a play from a name DJ. Amazing DJs sometimes help by defining a track in terms of an established artist: “here’s a Crystal Castles-style track from…” or “if you like Florence…”

I’m a convert. I like the DJs and I enjoy the unanchored listening experience. There’s something compulsive about this stream of new stuff and you get a sense of the ocean of talent that’s out there waiting to be discovered – but I can’t listen for too long. It turns out that providing your own context is quite hard work.

And the experience highlights just how dependent we are on DJs and stations for their judgements and their stories and their categories. In fact, listening to Amazing helps to explain the function of mainstream radio’s unfashionable props – the cosy playlists and charts and the guiding hand of the DJ.

Amazing must be doing something right. The station has just tempted Trevor Dann, grizzled radio veteran and outgoing Director of The Radio Academy, to join as Director of Programmes (he’s been presenting a show for a while now). So I asked Trevor if he’d answer a few questions about Amazing:

Does Amazing represent an alternative to the mainstream, label-based music biz? A kind of parallel music economy?

Yes. We think of it as a music-based social network which takes the power out of the hands of the playlist committee and the A&R men and gives it back to the artists and their fans. In the digital world we need tastemakers and trusted guides but we don’t need gatekeepers.

Do you aim to break artists?

If an Amazing artist crosses over and becomes a big star will you participate in their ongoing income – will you become a kind of label?

In tune with our ethical stance, we don’t seek to control or exploit anyone but we are here to help artists on their musical journey. First, they upload their material to amazingtunes.com. Then, if it’s popular on the website, it’ll be featured on Amazing Radio. If they get in the Amazing Chart and there’s a real buzz about them, Amazing Music may offer to help with everything from management and gig promotion to publishing and even record manufacture and distribution. But none of these services are compulsory.

If Amazing’s a hit, do you expect record labels to join in and upload tracks to amazingtunes? the way they came to trust iTunes and later Spotify? Will you encourage them to do so? Will you support a more conventional royalty scheme, for instance?

We don’t have any plans to broadcast music by artists signed major record labels. That model is in decline. Ours is the future.

It’s fascinating to hear a playlist assembled entirely from unplayed music with not a label in sight. How does the process differ from playlisting at a conventional station?

The playlist is chosen by the consumers of amazingtunes.com. There is some human intervention to prevent too much of one genre dominating the sound of the station and to take account of the time of day. But broadly speaking the playlist is ‘crowd-sourced’.

Will you build domain expertise? Hire DJs who have deep regional or genre knowledge? Will you give them freeplays? Will they become curators?

The ‘specialist’ presenters – Jim Gellatly (winner of the Radio Academy John Peel Award in 2008), Mark Ryan etc. pick their own music from the wealth of material on amazingtunes. I wouldn’t want to put words in his mouth but I think Jim in particular would be happy with the word ‘curator’. Part of his mission (and everyone’s at Amazing) is to encourage more bands to upload music so they can get airtime.

What does your research tell you about listeners? Who are they?

We are not part of RAJAR and we don’t publish any audience data.

What’s the natural audience for unsigned artists? Do you think that younger listeners are more open to unfamiliar sounds?

Feedback shows that our audience is very varied. It’s certainly not exclusively young or old, male or female. Rather like 6Music I think we have a very varied audience which encompasses old fogeys like me (and dare I say you Steve!), teenagers with an appetite for emerging music and everyone in between. I think the traditional radio obsession with demographics is rendered obsolete by a service like ours.

How about live shows? Will you add a few hours of live output so that DJs can interact with listeners?

Is there enough good stuff out there to fill a radio station? Are you surfacing artists overlooked by the labels? Is an Amazing artist different from one with a record deal?

I’m constantly amazed by the quality of music uploaded. The radio station could fill its playlist many times over with really brilliant stuff from all over the world. The weekly review show I present has music from 7 different countries this week.

What do the labels and the collection societies think about the Amazing model?

We don’t know about the majors and don’t really care. We are licenced by PRS who have been very encouraging of our effort to give exposure to more talent.